Getting Started in EZC
Welcome to EZC

General Guidelines for Fighting as a Unit

COMPLETE AIRCRAFT GUIDE
Latest topics
» How do I delete my profile?

EZC vs. other MU's
Battle Watcher

Fighting in an eRepublik Battle is as simple as clicking a button. But there are some important variables which come into play, and this article summarizes these variables.

Choosing a Battle
As a member of Easy Company, you will always have an opportunity to earn a daily bonus for completing your Daily Order (often abbreviated "DO"). Completing the DO is as simple as making 25 DO kills (these do not have to all be accomplished during the same DO battle, you may kill some now, more later).

Your DO will appear on your "home" page and contain a direct link to fight in that battle. It will also have an indication of how many kills you've made toward your 25 (which is displayed thusly: 0/25 or 21/25). Once you've completed your DO, the link to the DO battle remains, but the counter will disappear.

Once you've made 25 kills in a DO battle, a button will appear (also on your home page) for you to collect your bonus. Clicking it yields 1 energy bar (worth 100 Energy) and 5 Bazooka parts (which, once assembled, become a 1-shot-kill weapon worth 10,000 damage per shot. Each Bazooka is good for 3 shots.)

It is always a good idea to complete your DO before you go killing in other battles. Sometimes your DO link will lead you to a battle that is not currently active. Usually this means that the Division you are fighting in has either won or lost the current "round" and is waiting for other Divisions to finish. Rarely, the entire battle is over and you must wait for a new DO battle to be selected. In this rare case, wait a few minutes, a new DO should appear.

If you are looking for other meaningful battles, you can click the "Wars" button at the top of any eRepublik page. Important note: The wars which appear on this screen will be customized based on what territory your citizen is currently residing in. So if you are living in a territory that is not part of the eUSA, you may not see the battles which are considered most important for our Citizens to fight in.

== War mechanics ==
Wars have ''campaigns'' in which two countries and possibly their allies fight for a region: one defends it and others try to conquer it. Campaigns have many battles. In each battle there are 4 divisions, decided by experience level. Each division fights their own "miniature" battle, separate from each other.

Example: A citizen of level 51 experience enters a battle. That citizen will be fighting in Division 3, because of his experience level.

=== Campaigns ===
Campaigns are fights over a region. Campaigns last from 12 hours to 30 hours depending on how many ''battles'' are needed to get enough points to win the campaign. The winner of a campaign is the side which first wins 95 points in total and will get to attack next in the war. Each division is worth a different amount of points, it is scored as follows:

If a particular mini-Battle has been designated as "Epic" (based on the fact that it has accumulated a large amount of damage from citizens fighting in it), the points awarded in the above chart are doubled.

Achievement Medals are awarded after each Campaign has ended. The attacking side and the defending side will each have a Campaign Hero medal awarded to the citizen who has dealt the most damage in that entire campaign. These are not awarded for each Division. The award is 5 Gold. If it was an Epic battle, the award is doubled to 10 Gold.

=== Battles ===
Every ''campaign'' is a series of mini-battles which last from 1.5 hours to 2 hours depending on how dominant one combatant is.

The winner of each divisional battle is the side that first reaches over 1800 points. Every minute one side has over 50% control will award that side with X number of points where X is:

In order for a mini-battle to end, every division needs a side to reach 1800 points. If one division finishes before the others they must wait until all divisional battles are finished before the next one can begin. This way all divisions start at the same time each battle.

The amount of gold received through the Battle Hero medal varies by division.


Remember, the above-mentioned awards are doubled for all "Epic" battles. 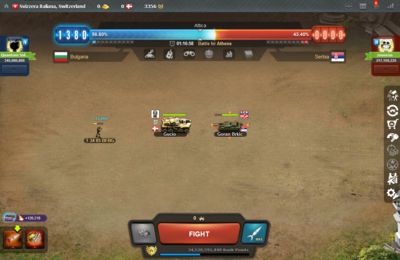 The countries that are involved in the battle are found on the top left and top right corner of the battlefield. Allies are visible by hovering over allies drop-down. The overall score delineated by Division can be found by clicking the "Campaign Details" button near the top. The battle heroes by division and mini-battle are visible by clicking the small graph icon on the bottom right. You will also see the influence you have made next to "My damage" header.

The following instructions are for the "old" battlefield represented by the smaller of the above two photos.

The influence bar is on the top of the battlefield. The bar will adjust back and forth (tug-of-war style) between center depending upon which side is carrying the advantage. The exact percentage can be seen by hovering over influence bar. Timer counts shows the time that's passed by in that mini-battle.

The fighting results of citizens will scroll underneath the influence bar. You see their
* avatar
* name
* influence

The weapons you and your enemy is using can be found under your status. You can change your weapon by clicking the double-headed arrow.

=== Fighting controls ===
The rank bar tells you your current rank and how far away are you from your next rank. By hovering over different parts of it you can see more detailed information. The influence you have made in the mini-battle can be found above rank bar.

The fighting controls can be found from the bottom of the battlefield. There are 5 different buttons:
* eat button or use energy bar or purchase health kit (energy bar button will be shown when you can't recover any more health by eating, health kit button will be shown after you consumed all the energy bars available in your storage)
* Fight button
* Use Rocket button (only if there's an available rocket in your storage)
* Use Special Weapons or Small bomb/bomb button (only if there's an available small bomb/bomb in your storage)
* Guerilla Fight Inventory and "Enemies Spotted" Guerilla Fights Join button

As default you will see the stats of the current mini-battle. If you want to see stats of other mini-battles or stats of whole battle, you can choose it from the drop-down menu.

''Note: Battle stats are only available for battles that are active and if you're in a country involved in the battle.''

If you can't fight in the battle, you will see a notice telling you that you need to be located in one of the countries participating in the battle to join the fight. You will also be given a chance to move to one of these countries directly from the battlefield.

When you press the "Change location" you will see a similar interface to the Change residence page. The only difference is that the list of countries you can move menu will only contain attacker and defender countries. Choose a country from the list and region where you want to move. The press "Move" button to do the action. IMPORTANT NOTE: There may often be a less expensive way to move in order to get in on a battle. Unless it is a Resistance War, you can choose to move to any region in any country allied with the side you are trying to fight for. This is done from the Change region screen found on your profile page.
Click here to read the next section about how to spend your Gold and USD wisely.